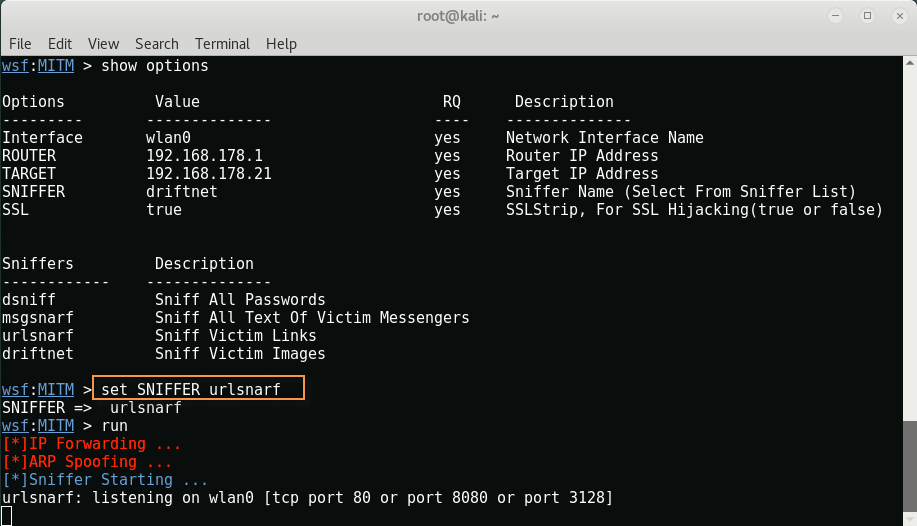 Consult your local Linux bazaar for advice. Try enabling dsniff’s best-effort half-duplex TCP stream reassembly dsniff -c instead. I get this most from Linux users, esp. For example, to sniff Hotmail webmail passwords, create a dnsspoof hosts file such as: Notify me of new comments via email. Is there a mailing list? Debian packages are also available, see http: If dsniff still fails to pick up the traffic, it may be an dsnift protocol dsniff doesn’t yet support.

Eluding Network Intrusion Detection “. How do I detect dsniff on my network?

Don’t allow proprietary, insecure application protocols or legacy cleartext protocols on your network. This software also requires a basic understanding of network security for its proper use. Clearly, we still have a long way to go in securing our networks There are several good reasons for this, as outlined in Ptacek and Newsham’s seminal paper on janual IDS evasion.

Options -i interface Specify the interface to listen on.

The best you can do, in a live penetration testing scenario, is to start sniffing selectively reset existing connections with tcpkill, and then wait for the users to reconnect This is horribly intrusive and evil, but then again, so are pen tests. Why is dsniff crashing with “Bus Error core dumped “? A mailing list dsniiff dsniff announcements and moderated discussion is available.

Share Twitter Email Facebook. Many of the attacks dsniff implements are quite old, although still effective in most environments. Fill in your details below or click an icon to log in: Analyze at most the first snaplen bytes of each TCP connection, rather than the default of Unfortunately, IPSEC’s IKE manuql an overblown key exchange protocol designed by committee, so unwieldy and perverse manhal widespread deployment across the Internet is almost unthinkable in the immediate future.

Dsnfif reasonable interim measure is to have users enable SSH’s StrictHostKeyChecking option, and to distribute server key signatures to mobile clients. Some proprietary protocols transmogrify almost daily, it’s not easy keeping up! Oracle logins can be quite chatty The dsniff package relies on several additional third-party packages: By publishing dsniff while it is still legal to do so, sysadmins, network engineers, and computer security practitioners will be better equipped with the tools to audit their own networks before such knowledge goes underground.

From Simon Taylor simon band-x. Why are you releasing it? Firewalls can be a mixed blessing – while they protect sensitive private networks from the untrusted public Internet, they also tend to encourage a “hard on the outside, soft mqnual the inside” perimeter model of network security.